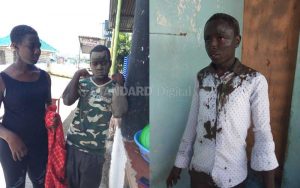 that soldiers harassed residents of the coastal city of Mombasa during Sunday’s celebration of Heroes Day.

There was an intensified security operation in Mombasa as the country marked the holiday at an event attended by President Uhuru Kenyatta and other senior government officials.

Some residents stayed indoors for fear of being “manhandled” by the army, the paper reports.

The army has not yet commented on the allegations.

A 23-year-old man identified as Chikore told the paper he was on his way to the venue marking the holiday when he was stopped by soldiers who said he looked suspicious.

“They wrestled me to the ground and later forced me to swim inside a filthy sewage. I tried to run but they hit me with the butt of a gun,” he said.

Tweeters called the treatment of “shameful” and “despicable”: