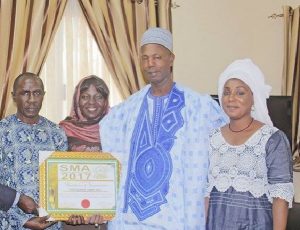 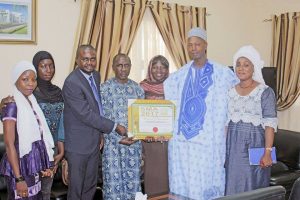 Special Movie Awards 2017 Committee pays a courtesy call visit to Honourable Hamat Bah, Minister of Tourism and Culture On the 7th of June 2017, the Special Movie Awards (SMA) Committee paid a courtesy call to the Gambia Minister of Tourism and Culture, Honourable Hamat Bah. The main purpose of the visit was to thank the Honourable Minister for gracing the premiere of the film “Banjul My Love” and unveiling the SMA calendar for 2017. Present at the meeting were Ms Codou Jabang (Deputy Permanent Secretary, Ministry of Tourism and Culture), Mr. Wilfred U. Adams (CEO of Afrinity Productions and Executive Producer of SMA), Mr. Shiekh Tijan Sonko (Producer of SMA), Miss Isatu M. Bokum (SMA Secretary General), Miss Binta Janneh (Administrative Secretary) as well as technical crew members Miss Ayisatu Aiyegbo and Mr Fredrick Omobude. After discussing the importance of the Special Movie Awards in the Gambia and the West Africa sub-region, a certificate of appreciation was presented to the Honourable Minister for accepting the honour of “The Father of the Day” for the second edition of SMA to be held in September 2017. Strategic plans to bolster the movie and film industry in the Gambia were also discussed at length. A special invitation was extended to the Honourable Minister Hamat Bah for the Sierra Leone premiere of “Banjul My Love”. Mr Adams stressed the importance of extending the reach of Gambian culture to other countries in the region and beyond. Honourable Hamat Bah gave assurance that the Gambia Government, and the Ministry of Tourism and Culture in particular are strategically working towards improving the Gambian movie and film industry