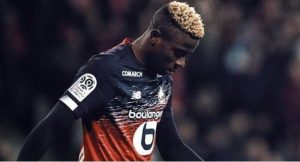 Osimhen, 21, took to his official Twitter handle to make the news known of his father’s demise.

“RIP Dad. No words to describe this feeling,” he tweeted.

His French Ligue 1 team also offered sympathy with the 2015 U-17 World Cup winner over the occurrence, warranting him of the club’s support in this “difficult time.”

“Today we learned with great sadness of the passing of @victorosimhen9 ‘s father,” the French side tweeted.

“The entire LOSC family is joined in grief with Victor and his family. He has our full support during this difficult time.”

The Nigeria Football Federation (NFF) also tweeted on its official handle, sympathying with the striker over his father’s death.

“Our thoughts and prayers are with you and your family at this time,” the football body said. “Take heart and stay strong.”

The former Wolfsburg player has had an impressive start season with The Mastiffs after earning 18 goals in 38 matches since joining them last summer from the Belgian side, Sporting Charleroi.