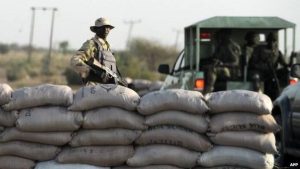 The Nigerian Army said on Sunday that the Boko Haram and Islamic State West Africa Province fighters were smuggling smoked fish into the country to sustain their criminal activities.

The army noted that its troops attached to the Operation Lafiya Dole arrested a syndicate of terrorists which specialised in smuggling “smoked fish from the Lake Chad region.”

According to the military, seven Boko Haram terrorists were also killed by an Improvised Explosive Device laid by them for the troops along the Jakana-Mainok Road in Borno State.

The army Operations’ Media Coordinator, Col. Aminu Iliyasu, in a release on Sunday, noted that four suspects in the terrorists’ fishing business were arrested and 16 sacks of smoked fish concealed in a room were recovered from them.

Iliyasu said, “As the artillery bombardment and ground assault by troops intensify, some marauding Boko Haram criminals met their waterloo as one of their vehicles, a Toyota Sam Sahara Model, stepped on an IED laid by them against troops at the Lamba’a Forest. The destruction consumed seven Boko Haram criminals while eight others suffered severe injuries.

“In another development, a syndicate that specialises in the smuggling of smoked fish from the Lake Chad region for sale in some parts of Nigeria has been arrested by the troops of Operation Lafiya Dole. Reliable information available revealed that Boko Haram criminals, ISWAP and their collaborators are using the fish business to finance and sustain their heinous activities.

“The proceeds from the sale are believed to be channelled into the procurement of foodstuffs, groceries, drugs, toiletries, vehicle spare parts and other items for the sustenance of their criminal activities.

“Troops of Sector 3 of the operation, while acting on reliable intelligence, raided the residence of some suspected illegal fish smugglers near the Water Board Internally Displaced Persons’ camp in the Monguno Local Government Area of Borno State. Four suspects were arrested and 16 sacks of smoked fish concealed in a room were recovered.

“In a similar operation, nine vehicles loaded with illegal smoked fish consignments were equally intercepted at Bukarti in the Geidam Local Government Area of Yobe State en-route Hadejia in Jigawa State. Consequently, 18 suspects including the drivers, conductors, mechanics and agents were also apprehended.”