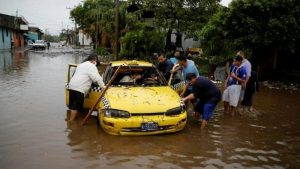 Tropical Storm Amanda has killed not less than 20 people in Central America, most of whom in El Salvador, as it smashed across several countries causing floods and landslides.

In El Salvador, officials said some 7,000 people have gone on refuge in 154 shelters as severe rain and strong winds eliminate hundreds of homes and destroy roads.

Carolina Recinos, a senior aide to President Nayib Bukele, said the storm had discarded the equal of “almost 10 percent” of the yearly rainfall on the country in a comparably short space of time.

Bukele proclaimed a 15-day state of emergency to deal with the effects of Amanda, which he proclaimed to have caused $200m in damage.

On Sunday, officials said the storm had washed away at least 900 homes.

“We’ve never experienced this,” Maria Torres, whose house was damaged, told The Associated Press news agency. “The rain was so strong and suddenly, the water entered the homes, and we just saw how they fell.”

The storm came at a time a country of some 6.6 million people are struggling with the danger of the coronavirus pandemic. To date, El Salvador has reported 2,582 confirmed infections and 46 related deaths.

“We are experiencing an unprecedented situation: one top-level emergency on top of another serious one,” said San Salvador Mayor Ernesto Muyshondt.

The Legislative Assembly consented the government’s use of a $389m loan from the International Monetary Fund to help tackle the pandemic and the storm’s impact.