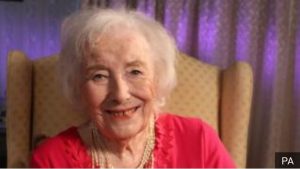 The singer was popularly known for performing hits such as We’ll Meet Again to troops on the front line in countries including India and Egypt.

Her family said they were “deeply saddened to announce the passing of one of Britain’s best-loved entertainers”.

In a statement, they make known she died on Thursday morning surrounded by her close relatives.

Information on a memorial will be announced at a later date.

Dame Vera, had sold more than a million records by the age of 22, was also remembered for singing The White Cliffs Of Dover, There’ll Always Be An England, I’ll Be Seeing You, Wishing and If Only I Had Wings.

Her wartime classic We’ll Meet Again was referenced by the Queen in April during a speech to Britons who were separated from families and friends during the coronavirus lockdown.

The late singer’s daughter, Virginia Lewis-Jones, said she was proud of the difference her mother made through her charity work.

She said the Dame Vera Lynn Children’s Charity, which her mother put forward to help young children with cerebral palsy, “always held a very special place in her heart”.