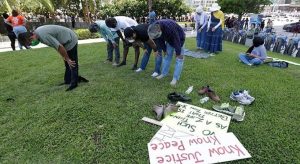 In the rouse of George Floyd’s death in police custody, many of the Muslim organisations in the United States have come together to call for reshaping to policing practices and to support Black-led organisations.

“The victimization of unarmed Black Muslims has a long and troubling history,” said a coalition statement signed by more than 90 civil rights, advocacy, community and faith organisations and released on Monday. “As American Muslims, we will draw on our diversity, our strength, and our resilience to demand these reforms because Black lives matter.”

The put forward changes include prohibiting racial profiling and manoeuvers that restrict the flow of blood or oxygen to the brain, such as chokeholds; making it legally easier for prosecutors to hold law enforcement accountable; and redirecting police funding “into community health, education, employment and housing programs”.

The disclosure also calls for the establishment of “a federal standard that use of force be reserved as a last resort, only when absolutely necessary” and after exhausting all reasonable options.

“These demands are a floor for our groups and not a ceiling. Some would call for much more,” said Farhana Khera, executive director of Muslim Advocates, one of the statement’s co-conveners.

“We’re also urging all American Muslims to call their members of Congress right now and to demand a stronger response from them.”