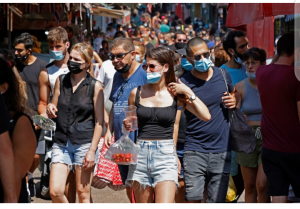 Afrinity Production discloses to you the warning put forward by The World Health Organization (WHO) that the global death toll from COVID-19 could double to two million before a successful vaccine is widely used – and could be even higher without concerted action to curb the pandemic.

“Unless we do it all, (two million deaths) … is not only imaginable but sadly very likely,” Mike Ryan, head of the UN agency’s emergencies programme, told a briefing on Friday.

The number of confirmed deaths some nine months since the new coronavirus was detected in China is currently at 988,965. Overall, more than 32.5 million infections have been registered, while almost 22.5 million people have recovered.

“One million is a terrible number and we need to reflect on that before we start considering a second million,” Ryan told reporters when asked how high the death toll could go. “Are we prepared collectively to do what it takes to avoid that number? “If we don’t take those actions … yes, we will be looking at that number and sadly much higher.”

With the pandemic showing no signs of slowing, Ryan said “we are not out of the woods anywhere” and stressed young people should not be blamed for a recent increase in infections after the easing of restrictions and lockdowns around the world.

Rather, indoor gatherings of people of all ages were driving the rise in case, he said.

The WHO warning came as cases in the United States, the hardest-hit nation in the world, crossed the seven-million mark – more than a fifth of the global total despite accounting for only four percent of the world population.