Youth protest in Cameroon over Macron's insult to their leader

Youth protest in Cameroon over Macron’s insult to their leader 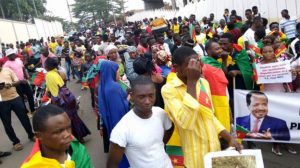 Scores of youths in Cameroon protested outside the French embassy in the capital, Yaoundé, over “insulting” remarks made by French President Emmanuel Macron on President Paul Biya.

This is after a video went viral on social media over the weekend of President Macron telling a Cameroonian activist in Paris that he had pressured Mr Biya to release opposition leader Maurice Kamto – who was eventually freed from jail after nine months in October 2019.

In the video, the French President was also heard saying that there were “intolerable human rights violations” taking place in Cameroon – a remark that came days after 22 people were killed by gunmen wearing military uniforms in Ngarbuh village in the country’s North-West region.

“I will call President Biya next week and we will put maximum pressure so that the situation ends,” Mr Macron told the activist.

The remarks have not been taken kindly by authorities in Yaoundé.

“We are comfortable with our president. He is a man of peace,” shouted one protester.

“France has no lessons to give Cameroon and Macron must apologise for insinuating that our president is his stooge,” said another.

And another simply carried a placard asking Macron to have respect for his elders, emphasising the fact that Cameroon is a sovereign state.

Civil activist Yvone Mumah Biya said the authorities were behind the protest.

“This is political manipulation. Somebody somewhere thinks they have not done their job well, and they think they can go and mobilise these youths,” she told the BBC.

Posted in Featured News | Comments Off on Youth protest in Cameroon over Macron’s insult to their leader
Tags: Cameroon, France, President, Protest