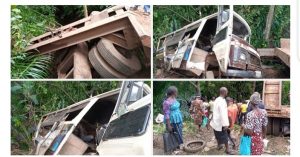 Afrinity Production unveil the tragic accident of a school bus which lead to the dead of twenty-one people, including schoolchildren in Enugu State, south-east Nigeria.

According to Channels TV, he explained that the nature of the accident was a collision that involved a school bus and a trailer in the state.

Kalu added that the incident happened at Mgbowo in Awgu Local Government Area of the state, saying it was as a result of dangerous driving.

Posted in Featured News | Comments Off on 21 Dead As School Bus, Trailer Collide In Enugu