Afrinity Production came to know about the return of some of Nigeria’s citizens who have been convicted and pardoned in various countries around the globe. 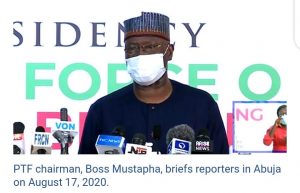 The Chairman of the Presidential Task Force on COVID-19, Mr Boss Mustapha, make known on Monday at a press briefing in Abuja.

He put forward some of the countries that were planning to repatriate such Nigerians to include the United Arab Emirates and the United States.

Mustapha said, “A number of countries have signified intention to repatriate Nigerians convicted and pardoned and paroled in those countries.

“They include the UAE, Egypt and the United States of America. Coming in the midst of our National Response to COVID-19, all relevant agencies of government are taking multi-sectoral steps to ensure that the process remains within acceptable international protocols and in line with bilateral agreements.”

He point that the repatriation of the convicted Nigerians was quite different from the government’s regular evacuation flights.

Mustapha, who is the Secretary to the Government of the Federation (SGF), stressed that this was in spite of the huge jump in the nation’s testing capacity and increased daily tests conducted.

*He, however, informed Nigerians that the country has yet to attain the desired level that would enable authorities to make conclusive statements on the rate of infection in Nigeria.*

The PTF chairman asked Nigerians to keep doing that which was giving the country record improvements and desist from actions capable of undermining the successes.

Posted in Featured News | Comments Off on Afrinity Production came to know about the return of some of Nigeria’s citizens who have been convicted and pardoned in various countries around the globe.

Afrinity Production make known the New Nigeria’s Confirm Corona Virus cases of 417 and their Resumption of International Flights (Previous Post)
(Next Post) Afrinity Production gives you the recap of the current Covid-19 stand in the Gambia.
Previous Image