‘Arrests In Sukuta After Clashes With Demolition Squad’ 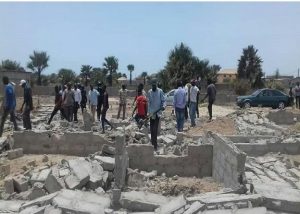 Some 14 people were taken into custody in Sukuta last evening after clashing with a demolition squad sent to implement a Physical Planning order on a land located in Salagi.

Among those taken into custody were activist Fatou Jaw Manneh and singer Mbi Kuru, both natives of Sukuta.

A few weeks before the tension emerged, few people staged a protest after receiving letters from the Department of Physical Planning asking them to stop all constructions on the land as it is a state land mainly reserve for schools, hospitals, markets and cemetery.

Nonetheless, the villagers were not in support of this as they raise complains of not seen any such development but by contrast private people, mostly senior government officials, have put up houses on the land.

*The villagers, mainly from the Jamba Kunda clan, claimed the government of former president Jammeh took the said land from them in Salagi but after a long battle, they reclaimed some of the tracts which they divided among original land-owning clans who allocated plots to family members, some of which have been developed.*

They said they were over it and also concluded that the matter has been resolved only to receive a visitation recently from officials of the Department of Physical Planning, who gave out letters ordering for them to stop all developments and leave the land as it belongs to the state.

The villagers refuses to comply with this and yesterday, a demolition squad accompanied by police came at the scene and managed to push down a number of structures. Their presence lead to a public confrontation with the villagers resulting in the arrests.

Another source confirmed that they have been charged with obstructing police officers but the villagers reportedly rejected the charges and refused to give any statement at the Brusbi police station.

Standard reporter Mafugi Ceesay, who was briefly taken into custody along with the protesters, was released shortly afterwards.