At least 25 people killed and dozens wounded in attack on eastern Azerbaijan, as clash over Nagorno-Karabakh intensifies. 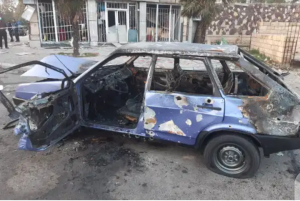 Afrinity Production make known the accusations made by Azerbaijan on Armenia for using cluster munitions in two days of attacks, killing at least 25 people and wounding dozens in Barda, eastern Azerbaijan, near Nagorno-Karabakh.

Armenia has denied carrying out the attacks on Tuesday, when four people were killed, and Wednesday, when 21 died.

“My father passed away years ago, and Fuad was the man of our family. After the first shelling, he went out to see what happened.

“The second rocket landed when he went outside. He was young. How can I live without my brother?”

“I saw dead bodies, injured people, everything was ruined,” she told Al Jazeera.

“After the the things l witnessed today, I don’t know how we will continue our normal lives, it is so hard after all of this. l believe that civilians should not be targeted in war. This is crime, terrorism. Stop it, Armenia.”

Posted in Featured News | Comments Off on At least 25 people killed and dozens wounded in attack on eastern Azerbaijan, as clash over Nagorno-Karabakh intensifies.