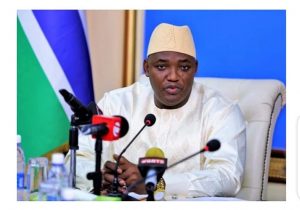 Afrinity Production unveil the the statement of President Barrow in his fourth state of the nation address at the National Assembly, the President assured Gambians that the 2021 presidential election will go ahead as planned despite covid-19 turmoil.

“I assure all Gambians that my government is determined that the general elections will be conducted in 2021, as scheduled. My conviction is that whatever our position or belief may be, we should always concede to the national interest, and forego selfishness,” he told lawmakers.

According to Standard, he said his government remained committed to its promise and desire of upholding good governance, democracy, the rule of law and respect for human rights.

“I encourage all Gambians to remain calm, focused and dedicated to making a positive difference in the welfare of the nation. These are moments to build on our resilience in order to achieve our noble aspirations. The pandemic has taught us the need to cultivate a new culture of cleanliness, a new social order of living in harmony as human beings, a new political vision of working together and a new way of embracing solidarity,” he said.

The president took a little over an hour to outline his government’s progress and challenges in a speech dominated by The Gambia’s uncertain economic future.

Economy he said The Gambia was on a “steep rise” towards economic boom when the “unexpected” struck – the coronavirus pandemic – and caused a major holdback.

“The decline in import volumes and economic activities will correspondingly lead to shortfalls in import duties and other tax revenues. Based on the current situation, an estimated 20% of expected revenue will be lost,” he said.

President Barrow said the total estimated fiscal impact from the decline in import duties and other tax revenues is D2.3 billion.

“That is 2.4% of GDP. The Ministry of Finance projects that the fiscal deficit will widen from 1.5 percent of GDP to 2.1 percent of GDP. An initial analysis also shows that GDP growth rates this year could decline from 6% to 2%,” he added.