BOAN 2015 PRESS STATEMENT: Heroine in the midst of Heroes 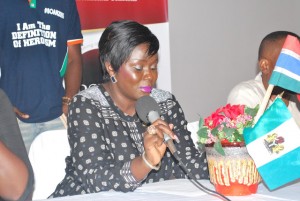 A Press Statement by the CEO of Platinum Entertainment, Miss OlyinkaFatima Edu, during the unveiling of Belle of African Nations (BOAN) in Gambia on Tuesday 22NDof September, 2015

First and foremost, I thank and appreciate The Executive President of Gambia, his Excellency SHEIKH PROFESSOR ALHAJI DR. YAHYA A.J.J. JAMMEH BABILI MANSA, who obviously has shown his beliefs in women; as reflected in his engagement of a lot of women in his government and for the promotion of Peace, Love, unity and brotherly coexistence among his people, irrespective of their religious backgrounds.

I also appreciate Her Excellency, the Vice President of Gambia,AJA DR. ISATOU NJIE-SAIDY for her good works and for effectively representing the African women in no small measure.Her service through her political career has shown that for sure, women are good administrators in governance.I thank for her support and encouragement despite the short notice.

It is heart-warming to have made it here today. I must confess that since our arrival here in The Gambia, we have been made to feel at home. It is as though we have not left Nigeria; Gambia feels like home away from home. Interestingly, I never realised I had been smiling more until I was reminded that the Gambia is the “Smiling Coast of West Africa”.

I also want to thank the local organising committee for putting this event together. Most importantly, I thank you all for gracing this occasion.

The purpose of our visit to Gambia is unique. Unique in the sense that we have brought to Gambia an experience that is common yet new; a tradition that is familiar yet unfamiliar. In the spirit of brotherhood or sisterhood, Platinum Entertainment Nigeria is organising a Pan-African Beauty Pageant: Belle of African Nations (BOAN). I am tempted to tell you about BOAN straight away, however, it would be inappropriate to do so without first introducing the brain behind this laudable event – Platinum Entertainment.

Platinum Entertainment Nigeria Limited is a Lagos based organisation that started years ago with the aim of giving quality and precise information/services, and combining ideas to match international standards anywhere in the world and become the biggest entertainment house in Africa. Over the years, we have worked on redefining the entertainment industry, thereby reforming it into a marketable brand name, to better communicate with our clients, not just in Nigeria but the world over. With a time-tested team of young, talented and creative minds, we are simply dedicated and trained to serve the public through our unique initiatives.

There is a huge growth in the entertainment industry and hence the need for proper management/structures. We are keen to unveiling our wonderful and unique initiatives to the world through this medium because life would be just too boring and worrisome without entertainment. More so, entertainment has become a voice for universal remedy and today presents itself the most lucrative venture for investments with a global acceptance.

• To contribute to the Nigerian/African economy through quality entertainment

• Be the best at our services.

Africa in her own beauty is exclusively recognized for her fairness in dealings, solidarity, and co-ordination amongst her nations. Various organizations have been established to propel and unify all African countries. Few of these organizations include the Economic Community of West African States (ECOWAS) and the African Union (AU). For example, the CAF Nations’ Cup is believed to come up so as to create continuity in the trend of unity and progress of the continent through sport. BOAN, in this respect, aligns with the goal of unifying Africa. However, BOAN also intends to add the missing link – carrying African women along in the affairs of the continent. Hence, Belle of African Nations can be seen as a unique medium for the socio-cultural unification of Africa.

Belle of African Nations (BOAN) is the first of its kind as a socio-cultural Pan-African Beauty Pageant that aims to identify with the unforgettable legacies of African historicalheroines, publicising their lives, times; struggles, challenges and victoriesto the world through entertainment, in such a way that beauty and brains are modelled to birth the heroines of our time.

The exploits of African Heroines must not lay buried forever. Heroines likeFunmilayoRansome-Kuti, the Woman Activist whose feminism and democratic socialism led to the creation of The Abeokuta Women’s Union (AWU); Queen Ahmose-Nefertari (Co-founder of the glorious 18th century dynasty of KMT- called ”The greatest royal family that ever mounted a throne); Empress Candace of Meroe (Formidable and famous military leader); Nana YaaAsantewa,Queen Amina of Zazzau (Zaria),Margaret Ekpo,Miriam Makeba, Queen Nzinga, Queen Makeda of Sheba, and countless unrecognised others must be remembered and celebrated.

Since we live in societies (Africa) where the feminine gender struggles to gain that global recognition and equality that would reposition and place them at the apex alongside their male counterparts. BOAN is a pedestal that would encourage and motivate girls and ladies alike to look beyond their beauty, unlock their genius through pageantry, thus enabling them toharness their potentials.If the aforementioned heroines could fight against all odds to make their marks in a world dominated by men – with limited accessibility to education – then females of this generation, empowered with numerous advantages such as the social media, technology and other innovative discoveries can replicate and even surpass their golden feats.

BOAN therefore identifies with African historical heroines, upholds their legacies, showcases their symbols of authorities and celebrates their heroic bequeaths. Boan is a bridge between the past, the present and the future. By aligning the present with the past, we hope to produce a beauty queen that epitomizes beauty, brains, passion, honour and heroism like no other; a queen that is brave enough to echo and re-echo the various unheard voices of the African women waiting to be liberated, discovered and empowered.

However, BOAN is not limited to the geographical Africa Space; Africans in diaspora also participate. This is because being African goes beyond the colour of one’s skin – it is a mind-set. For this reason, BOAN is not just an African affair, people from different parts of the globe are also carried along. Africans in diaspora are craving for the commencement of Belle of African Nations.

BOAN is not just a beauty pageant. It looks beyond the conventional pageantry as it captures the essence of artistic beauty. Our ultimate intention is to empower ladies to transform their various societies. We introduce them to the histories of female icons that through their activism made reasonable impacts in male dominated territories. In doing so, we do not just refer them to the pages of history books; we re-enact their stories through different forms of art – Paintings, Plays, Poetry, Music, Documentary and so on. In all this, our belles are not going to be mere observers but active participants. Having said that, every edition of BOAN would be modelled after one female African legend and the symbol closely associated with the legend would be the symbol on the coveted Gold and Diamond Crown.

The 2015 edition of this cross-cultural and historical event will feature rich and robust intercultural exchange, beauty, bravery, intelligence and history, as our innovative queens from across the continent of Africa hit the shores of Lagos, Nigeria. This maiden edition of BOAN is tagged HEROINE IN THE MIDST OF HEROES in a bid to celebrate the uniqueness and heroism of a woman who soared and dominated socio-political territories that were the reserves of men: Madame EfunroyeTinubu. More so, BOAN is poised to rewrite history – taking us back to where the future was. From Lagos, Nigeria, we are projecting something uniquely different from the continent of Africa to the entire world in the history of pageantry. Annually and gradually, the whole of Africa will be re-projected and re-presented to world through BOAN.

The play “Madame Tinubu” by Prof.AkinwunmiIsola will be staged, as we unveil the different sides of a woman linked to the Gelede of her time. The essence of retelling her story is to challenge, inspire, motivate and impact the younger generation of people to standout and affect their worlds irrespective of their backgrounds and social standings. Simply put, we are redefining the conventional outlook of pageantry. Aside from celebrating Madame Tinubu, we will also be celebrating African heroines who distinguished and are distinguishing themselves in their various endeavours – makers and shakers of their world – presenting them with the Heroine in the midst of Heroes awards.

Importantly, we will also be unveiling BELLE SOCIAL DEVELOPMENT INITIATIVE, (BSDI). BSDI is a charitable Non-Governmental Organisation, (Foundation) associated with Belle of African Nations (BOAN). Its sole purpose is to raise funds and carry out various humanitarian projects that would address the social development issues embedded in societies within the member countries of BOAN.

ROTATION OF BOAN AMONG AFRICAN COUNTRIES

Countries across the continent of Africa share certain cultural beliefs, customs and traditions in common. However, most Africans, probably because of the vast cultural heritages of Africa, have not encountered other socio-cultural practises within and outside their societies; they do not even know about most female African historical figures. BOAN was initiated to bridge this gap. Any country that hosts BOAN produces the heroine whose story is retold through documentaries, photography, dramatic re-enactment and other artistic media. Such is the uniqueness of BOAN.

Rotating the hosting of BOAN within all participating countries associated with this project will be an opportunity to strengthen the cord of brotherhood in Africa and unite the ties of her sisterhood. Beyond the shores of Africa, our contestants in the diaspora will have the privilege to tour and experience other African countries and cultures other than theirs. It will enable us to encourage and motivate the younger generation of Africans, teaching them socio-cultural and political lessons from the history of African heroines. This way, every African who is away from home will feel at home in any African countries without that regret we sometimes feel while we roam. That feeling of home is what I have felt here in Gambia since my arrival.

THE GAMBIA AS A TAKE-OFF BASE FOR PARTICIPANTS

The participants from all the African countries at the 2015 edition of BOAN shall congregate in The Gambia, from where they shall take-off to Lagos Nigeria. Our choice of the Gambia as a take-off point was informed by the fact that Gambia, as a nation is, very peaceful. The display of love and affection that have been bestowed on us and the observed lifestyles of the people, which obviously, is a total display of love for one another is what Africa and in short, the whole world needs. Gambia has therefore, become a standard and a model for peaceful coexistence in Africa.

The participants shall arrive The Gambia from their various countries and stay for two days. Within this time, they shall be made to experience the Peace in the country and also be exposed to the various tourist attractions in the country. The message of Peace and Love and brotherly coexistence they shall take back to their countries shall have positive impact in the way of thinking of the citizens of their countries. Similarly, their tourist experiences shall be noised abroad.

However, the Belles’ experiences shall be documented and shown at the main event in Nigeria. This shall be broadcast all around the world.

Thank you, thank you, and thank you once again for your great show of love and hospitality. Long live the Gambia; long live the smiling coast of West Africa. Thanks you!