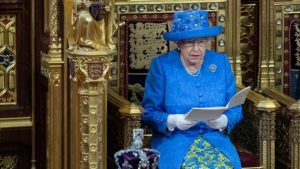 Johnson plans to put the bill before MPs next week, once debate on the Queen’s Speech has wrapped up — but it’s not clear if he’ll get the chance, given that his perilous position in Parliament means he is at risk of losing the vote on his agenda.

Even more pressing is the fact that Johnson is yet to agree any deal with the EU. If he hasn’t done so by the EU summit at the end of this week, he’s mandated by law to request another Brexit extension.

“An immigration bill, ending free movement, will lay the foundation for a fair, modern and global immigration system,” the speech adds.

“My Government remains committed to ensuring that resident European citizens, who have built their lives in, and contributed so much to, the United Kingdom, have the right to remain. The bill will include measures that reinforce this commitment,” she added.

“Steps will be taken to provide certainty, stability and new opportunities for the financial services and legal sectors.”