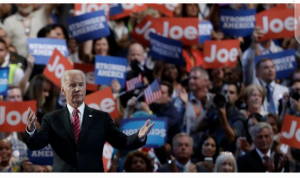 A presidential primary season like no other will culminate this week for the Democratic Party in the United States in an unprecedented, mostly digital convention that is set to cement Joe Biden as the official candidate tasked with taking on President Donald Trump in a November election.

Only essential staff will be on the ground at the convention centre in Milwaukee, Wisconsin, a pivotal swing state that had spent millions of dollars preparing to host the high-profile event, which runs from August 17 to 20, before it was scaled back in light of the pandemic.

The convention comes as Democratic officials work to energise voters behind Biden’s candidacy – and not simply against Trump.

While defeating the Republican president is a huge motivator for many within the party, there is some concern that less-engaged voters who lean Democrat and swing voters are not locked in to cast ballots for Biden, especially as the pandemic is expected to create barriers to voting.

Following a fractious and ideologically diverse 28-candidate primary season, the party has also sought to unify before the convention and avoid a repeat of 2016 when Hillary Clinton’s supporters clashed with those backing her progressive rival, Bernie Sanders.

Posted in Featured News | Comments Off on Convention set for formal nomination of Democrats Candidate Joe Biden.
Tags: US Election