Diallo says he won round one, election body says no 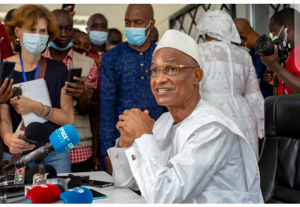 Afrinity Production draw attention to Guinean opposition candidate Cellou Dalein Diallo who says he has won the first round of a high-stakes presidential election, prompting the country’s election body, which has yet to publish results, to call his self-declared victory “void”.

“Despite the serious anomalies that marred the smooth running of the … election and in view of the results that came out of the ballot boxes, I am victorious in this election in the first round,” Diallo told journalists and cheering supporters on Monday, a day after the vote was held.

“I invite all my fellow citizens who love peace and justice to stay vigilant and committed to defend this democratic victory,” he said.

Outside the building in the capital, Conakry, supporters erupted in joy and chanted “Cellou, president”. Elsewhere in the city, security forces fired tear gas canisters at crowds assembling in support of Diallo.

The opposition leader did not give any figures but said the tally was based on his party’s count, not an official tally being conducted by the national election commission.

“It is not up to a candidate or a person to proclaim himself the winner outside the bodies defined by the law,” he said.

Diallo, 68, is the main challenger to Guinea’s 82-year-old incumbent President Alpha Conde, who is seeking a third term in office after a constitutional change in March.

Posted in Featured News | Comments Off on Diallo says he won round one, election body says no