Trump and Obama mock each other in rival rallies 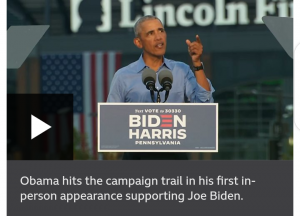 Afrinity Production draw attention to US President Donald Trump and his predecessor, Barack Obama, who have directed blistering attacks at each other during rival rallies.

In North Carolina, the Republican president mocked Mr Obama for being wrong about the 2016 election outcome.

With 13 days to go until this election, Mr Biden holds a solid lead nationally.

But the margin is slimmer in the handful of US states that could go either way and ultimately decide the outcome on 3 November.

Diallo says he won round one, election body says no (Previous Post)
(Next Post) Public gathering ban lifted after days of protest in Thailand
Previous Image