Public gathering ban lifted after days of protest in Thailand 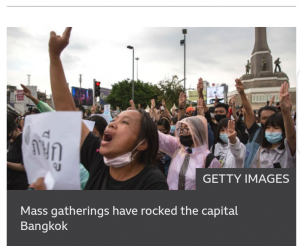 Afrinity Production unveil the lifting of the banning of public gathering in Thailand, after an emergency decree failed to end mass anti-government protests across the country.

BBC said a government statement said it was revoking the measures as the “serious situation” had eased.

Thailand has now faced months of large democracy protests targeting the premier and the king.

The student-led movement is demanding the resignation of Mr Prayuth, a former general who seized power in a 2014 coup and last year became prime minister after a controversial vote.

They want a new election, amendments to the constitution, and an end to the harassment of state critics.

They are also demanding curbs on the king’s powers – a call that has led to unprecedented public discussion of an institution shielded from criticism by law.

Trump and Obama mock each other in rival rallies (Previous Post)
(Next Post) Waving flags, they sang Nigeria’s anthem. Then they were shot at
Previous Image