Waving flags, they sang Nigeria’s anthem. Then they were shot at 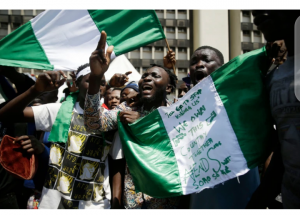 Afrinity Production reliably bring to your notice statement of Peaceful protesters in Nigeria, saying they will not give up their fight against police brutality and injustice, even after the police shooting that shocked the nation.

According to Aljazeera, Agboola Fabiyi was close to the front line when he saw armed soldiers approach a peaceful protest camp in Lekki, an upmarket area in Nigeria’s commercial capital, Lagos.

The 28-year-old protester said some of the soldiers reached the crowd and asked them to leave in compliance with a curfew imposed by the authorities earlier on Tuesday. When the protesters demanding an end to police brutality refused, Fabiyi said the soldiers began firing into the air, before turning their guns towards them.

“We never imagined they would start shooting at us because we were peaceful and not carrying weapons,” he said on Wednesday, still shaken. “The worst we expected was for the soldiers to throw tear gas to disperse us.”

Fabiyi said he quickly laid face down to the ground as protesters at the Lekki toll plaza began scampering to safety. Shortly after, he also crawled away.

Several witnesses have given similar accounts on social media and news reports, describing an unprovoked attack that caused outrage across Nigeria and abroad. Graphic footage posted online showed demonstrators fleeing as gunfire and sirens rang out, with some trying to remove shrapnel from wounded protesters.

Posted in Featured News | Comments Off on Waving flags, they sang Nigeria’s anthem. Then they were shot at