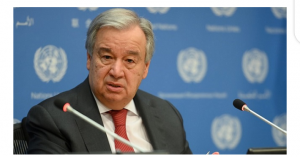 This position was contained in a communiqué by his spokesperson, Stephane Dujarric.

According to the statement, the Secretary-General has been following recent developments in Nigeria and has called for an end to police brutality and abuses.

Mr Guterres condemned the shooting of protesters on Tuesday at Lekki in Lagos which resulted in multiple deaths and caused many injuries.

He expressed his condolences to the bereaved families and wished a speedy recovery to those injured.

The Secretary-General called on the Nigerian authorities to investigate the incidents and hold the perpetrators accountable.

Posted in Featured News | Comments Off on UN Condemns Shooting Of Lekki Protesters, Calls For End To Police Brutality In Nigeria

Waving flags, they sang Nigeria’s anthem. Then they were shot at (Previous Post)
(Next Post) Samba Camara is Literally Inspiring.
Previous Image