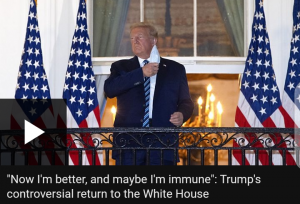 This was US President Donald Trump’s advice to the public if they were worried about catching coronavirus.

He made the comments in a video message posted shortly after being discharged from hospital, having received treatment since his own diagnosis.

But, as many have pointed out, this was a man with a helicopter, a large medical team and experimental drug treatments at his disposal. How does the picture change for Americans with Covid-19 who do not reside at the White House?

It is hard to pinpoint the “average American” amid such a diverse country and such a complicated health system, but here are some of the areas where the president received special treatment and a look at how this compares to the experiences of the wider population.

Posted in Featured News | Comments Off on “Don’t be afraid of it. You’re going to beat it.”