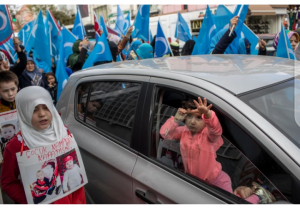 Afrinity Production unveiling Germany’s leading dozens of countries, including the United States, the United Kingdom and Japan, urging China to respect the rights of its minority Muslim Uighurs, and expressing their concern about the political situation in Hong Kong, in a move that drew a quick and angry response from Beijing.

“We are gravely concerned about the human rights situation in Xinjiang and the recent developments in Hong Kong,” said Germany’s UN ambassador Christoph Heusgen, who led the initiative during a meeting on human rights on Tuesday at the UN.

Among the 39 countries signing the declaration were most of the EU member states, as well as Canada, Haiti, Honduras, Australia and New Zealand.

Zhang said the declaration is aimed at “provoking confrontation” among UN member states.

Marie Jeng Is A Rare Gem. (Previous Post)
(Next Post) “Don’t be afraid of it. You’re going to beat it.”
Previous Image