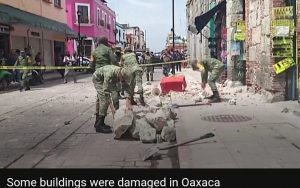 A strong earthquake has shaken buildings and caused severe panic in six Mexican states, killing not less than five people.

Dozens were working from home as the capital, Mexico City, is under lockdown due to the Covid-19.

The focal point of the quake, with a magnitude of 7.4, was in the south-western state of Oaxaca.

All of the reported fatalities were from the state on the country’s Pacific coast.

It comes less than three years after an earthquake left hundreds dead and thousands homeless in Mexico City.

About 200 houses in the tourist town of La Crucecita were damaged on Tuesday, a local official said.

“We lost everything in one moment to nature,” Vicente Romero, an owner of a stationary shop told the Reuters news agency. “This is our life’s work.”

Rescue workers have not yet been able to access isolated villages reportedly hit, raising fears that more could have been injured.

Six hours after the quake, more than 400 aftershocks had been recorded across the region, the strongest at 4.6 magnitude.