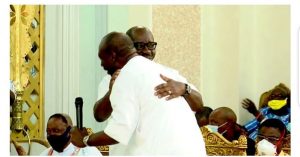 Afrinity Production unveil to you the hopefulness of Edo State for a peaceful governorship poll following a new twist in the electioneering events in the state.

In what many would not have expected to see before the September 19 poll, Governor Godwin Obaseki and his major rival, Pastor Osagie Ize-Iyamu, embraced each other for the first time in many months.

This follows weeks of heated tension in the state as a result of the activities of the two leading political parties in Edo – the Peoples Democratic Party (PDP) and the All Progressives Congress (APC).

Disturbed with the series of attacks and counter-attacks during campaign rallies in the last couple of weeks, the Oba of Benin, Ewuare II, took a decisive step on Wednesday to end the trend of violence in the state.

The traditional ruler convened a peace meeting which had in attendance various leaders of the PDP and the APC in Edo at his palace in Benin City.

Notable among those in attendance are the PDP candidate, Obaseki; the APC flagbearer, Ize-Iyamu, former APC national chairman, Adams Oshiomhole; his predecessor, John Oyegun, and the state Deputy Governor, Philip Shaibu, among other political actors in Edo.

Shortly after all the attendees were seated, Obaseki, Ize-Iyamu, and others went before the traditional ruler to pay homages to him.

Posted in Featured News | Comments Off on Edo Election: Obaseki, Ize-Iyamu Embrace As Oba Of Benin Calls For Peace