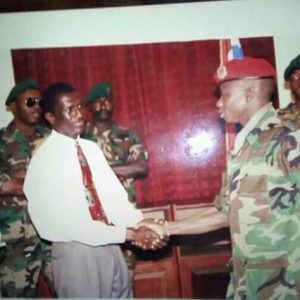 Edward Singhatey has debunked testimonies of earlier TRRC witnesses, who alleged that he had participated in the killing of one-time finance minister Ousman Koro Ceesay on 29th June, 1995.

“The last time I saw Koro alive was when I went to see former President Yahya Jammeh at the airport during his departure,” Mr Singhatey, who was the then vice chairman of the military junta that toppled Sir Dawda Kairaba Jawara in July 1994 told the truth-seeking Commission on Monday.

He said he was informed by Alhagie Mustapha Wada the following morning that the finance minister Koro Ceesay had died.  He said he attended Koro’s burial but there were suspicions that he was killed by soldiers.”

According to him, after the burial, an investigation was conducted and handed over to Jammeh. He said Koro was involved in a money business from Libya that was sent through the Gambia government to be given to the rebels in Cassamance.

“I got to know about this when I was with Jammeh and Samba Bah the former NIA director. Jammeh was complaining about the border closure. He said we have some good news because Libya had sent money to the rebels in Casamance and Koro was always in support of Jammeh and he suggested means of transferring the money.”

He also said it was later that he came to learn that the NIA also conducted an independent investigation about the incident. “The money was given to Koro to give to the rebels because the former NIA head feels it necessary for Koro to go.”

The Commission’s lead Counsel Essa Faal read a statement of one of the witnesses who alleged that he –Singhatey- was in fact, part of those who assassinated Koro, but he denied the allegation.

In another statement read by lead counsel Faal, Singhatey was accused of being jealous of Koro because he was so close to Jammeh, which resulted to his assassination by him –Singhatey- something he strongly denied.

Koro Ceesay’s sister, Ya Bajan Cessay had earlier testified before the Commission and said that her mother told her that Koro had an argument with Singhatey and he threatened to kill him, but Singhatey denied that allegation as well.

In another statement by witness Lamin Fatty, also one of his former orderlies, stated that on the day Koro was assassinated, they dropped Singateh at Touray’s house but he –Singateh- said Fatty made a mistake in his statement.

Counsel Faal said Yankuba Touray’s drivers, Jah Ndum Ceesay, Essa Mendy and Lamin Ndure had all said that they saw Singhatey at Touray’s house at night. He added that the evidence also indicated that Singhatey spoke to Jammeh at the foot of the aircraft before his departure.

Faal also said that evidence suggest that on the day of Koro’s assassination Yankuba Touray’s family was transferred to Singhatey’s house, while the guards were told to go for patrol because the country was under attack. Singhatey denied that he was not aware and denied all suggested evidences.

In the statement of Alhagie Kanji, which was televised for Singateh, Kanji said that Singateh briefed them that they were going to get rid of one fucking cont, adding that he did the assassination with Peter Singhatey, Pa Alieu Gomez, Tumbul Tamba, BK Jatta and Yankuba Touray.

Kanji narrated that after their debriefing at Singhatey’s house at Cap Point, they proceeded to Cpt. Yankuba Touray’s residence around Senegambia at around 8 pm.

“Upon arrival, Edward asked us to stay because they have an activity at the airport and what they briefed us was that they will be coming with one minister. That night, none of Yankuba Touray’s guards were around neither his family members. We were waiting there and after sometime, Peter came in and said they are coming. I saw Edward and Yankuba with a civilian who he said was a minister. Edward led and I followed and there was an attack from the back. Edward hit and asked me and Peter to hit and later called others to hit till the man died. The remains were taken by Edward Singhatey, Peter Singhatey and Yankuba Touray,” Kanji said.

Singhatey however denied the allegation by Kanji, calling it totally false. He said he never work with Kanji.

Counsel Faal put it on him that he had denied 50 allegations that he was adversely mentioned in.