Famara’s Story Is Not Only Amazing But Is Also Incredibly Inspiring!!! 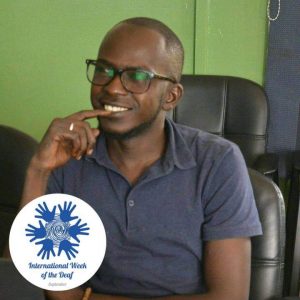 Afrinity Production draw cognizance to Famara Fofana , a native of Jokadou Dasilami, North Bank Region. He helped found the UTG Writers Club which seems to be dormant now for reasons he don’t know. He is also a founder and member of the Satebakano Youth Development Association in Jokadou Dasilami which seeks to promote community development undertakings in the NBR community.

His journey to where he is today hasn’t been easy just as it has been the case for many others born to penniless farmers in rural Gambia. It was never plain sailing – so many rough and tumbles. Episodes of being sent out of the classroom during exams for late or non payment of school fees are still fresh in the mind. “But what is life without those sort of challenges? Those experiences kept us going. On the flip side, I must say there have been certain people whose support and guidance brought me to the not-so enviable position I am today” he said.

With his Aspiring Communications outfit, he has also fronted several voluntary media clinics and mentorship programmes for high school press clubs and even Gambia College where they have taken aspiring journalists on the rudiments of the trade.

In the past, he had also teamed up with his friend Sang Wisdom Mendy to offer journalism training to budding reporters on some critical areas of the trade. He may not have been part of many organizations but when it matters he do help advance the cause of the less privileged and/or marginalized groups through his writings. Telling stories is one of humankind’s abiding and defining impulses.

Let’s dive into his storytelling, so far, he has done two major literary projects: ‘When My Village Was My Village'(a fiction) and ‘Recollections of an African Child'( a creative non-fiction). He believes that we all have a unique perspective, now more than ever and our voices need to be heard.

He has also contributed modestly to ‘The Long Road to Democracy in The Gambia’, an anthology of poems on the 2016 political impasse and the events that preceded it.

On top of those works, he also has been actively doing creative essays on a range of social issues in the last few years and some bits of poetry here and there. These days however, he is more into public affairs commentaries and scholarly works relating to journalism and the media in general.

Famara likes to write because by writing he become self expressive. It brings the best out of him in terms of his creative endowments. He also do so to not just inform the readers but to entertain them in a way that’s both enriching and stylish.

His career in the media started with GRTS and that was also where he has been for about a decade, doing almost everything. From reporting, editing, newscasting, documentaries and even sports analysis and presentation. His time at GRTS didn’t stop him from writing articles for the print media too. In fact, he sees himself as more of a newspaper person than broadcast even though television is where he came to be known.

Fofana can’t do without friends and family . “I am all about people. I am a huge lover of attaya, football , the internet and spicy write-ups by others. I feel energized by those things”, he said..

His late father was his first source of inspiration by the way of his humility and service to his community. Despite being poor, his faith in God was unshakable.

Professionally, Famara normally mention a certain Sheriff Bojang of The Standard Newspaper, Nana Grey-Johnson, and Ardy Fatty as persons who inspire him to this day. Although a young person, the personality of one Hatab Fadera also speaks to the very core of his being.

Right now, he is a just a storyteller, a freelance journalist and an ordinary scholar, pursuing his master’s degree in Media and Communications Studies at the Graduate School of Social Sciences, Ankara University, Turkey.

In the next five years, he would love to have grown into an academician of the highest pedigree as well as a champion of the rights and welfare of the poor and the less privileged through humanitarian work.

Posted in Featured News | Comments Off on Famara’s Story Is Not Only Amazing But Is Also Incredibly Inspiring!!!