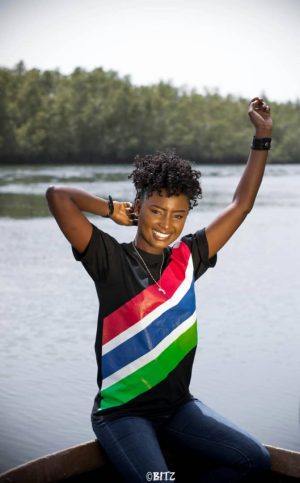 Mariama’s background focuses on media and performing arts. She started acting when she was just 12 years old from school and also started radio around the same time through organizations that she was a part of. She uses performing arts to create awareness and sensitise people on issues affecting them especially on women and girls related issues and Youth at large. Until today, this is exactly what she is doing.

What inspire Mariama into acting is the fact that you are able to tell stories that people can relate with. Her first lead role in a play was “The girl that cannot cook” and she found herself in that situation at that time when she was in primary school. It was interesting how that play was able to teach her lessons on how it is important to learn how to cook. Not only because of societal pressure, because to Mariama it is an independent benefit for you to be able to cater for yourself and that is what started the whole journey for her. Working it up to a more serious storylines that she became part of, including child marriage, FGM related issues and so many other storylines that she find really inspiring in both cultural and historical at the Ebunjan Theatre’ level.

Miss Colley revealed her excitement of the award she won from the precious Hollywood GFA 2020. It is indeed a big achievement for her and the country as a whole, a great recognition to be recognized in such a big platform outside your country. To Mariama , this means there is potential, skills and knowledge to what she is doing. “To me this is just the beginning, there is more to be done but the recognition alone is just beautiful and really encouraging”, she said.

When ask what she dislike about the movie world, she said she actually don’t dislike much about the movie world apart from the fact that people misjudge you and some don’t understand you are not living your character but you are just portraying what the script directs you to do. Also the notion of people approaching actors to be featured in their movies for free, she said art is not a cheap and is not supposed to be for free.

Mariama look up to Babu Ceesay, a Gambian Hollywood actor, she likes the fact that he is such a humble person and also a very natural character. Another person she look upto is Aunty Janet Badjan Young the founder, CEO and Director of Ebunjan Theatre’.

“So that the world will know that we have a great potential in this country and and there is a lot that could be achieve if we all work together and build what we have, because we have the talent here, we have the knowledge and we have the skills”, she concluded.