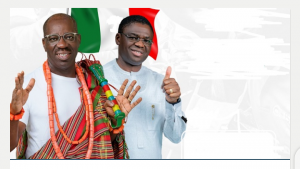 Afrinity Production unveil the victory of Mr Godwin Obaseki of the Peoples Democratic Party (PDP) in defeating Mr Osagie Ize-Iyamu, to win a second term as governor of Edo State.

Governor Obaseki was returned elected by the Independent National Electoral Commission (INEC) after polling the highest number of votes in the keenly-contested poll.

INEC Returning Officer for the poll, Professor Akpofure Rem-Rukeh, declared the governor as the winner on Sunday at the office of the electoral umpire in Benin City, which doubled as the final collation centre.

“That Godwin Obaseki of PDP having satisfied the requirements of the law in meeting the 25 per cent in two-third of the local government areas in the state and having a margin of lead higher than the cancelled votes is hereby declared the winner and returned elected,” Professor Rem-Rukeh who is also the Vice-Chancellor of the University of Petroleum Resources, stated.

A total of 14 political parties fielded candidates to jostle for the office of the governor in the state.