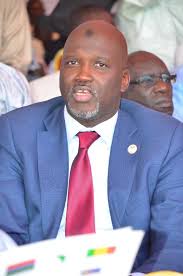 The government of The Gambia Monday announced the endorsement of D50 million to the Truth Reconciliation and Reparation Commission (TRRC) Victim Fund.

“Today, almost one year into the TRRC public hearing, the government is fulfilling its promise to grant reparation for the victims of human rights violations and abuses within the mandates of the TRRC. On behalf of President Barrow, it is with great pleasure that I announce to you the decision of the government to contribute to the TRRC Victim Trust Fund an initial amount of D50 million dalasis with immediate effect,” Abubacarr B. Tambadou, the attorney general and minister of Justice said.

Mr. Tambadou was speaking on Monday during a press conference in Banjul.

He said: “In order to underscore the importance the government attaches to these objectives, the word ‘reparation’ was included in the title of our truth commission, making it the first of its kind anywhere in the world.”

The D50 million, he said, is paid out from the proceeds of sales of the former president’s assets which were currently sold in accordance with the recommendations of the Janneh Commission.

The Justice minister thanked Gambians based in the country and those in diaspora for their individual and collective act of generosity towards the welfare of the victims.

He called on private business enterprises to become so generous and donate to the TRRC Victim Trust Fund “so that we can together make reparations meaningful for the victims who deserve our individual and collective support to rebuild lives.

“Let us demonstrate to the world our true Gambian characters of benevolence, compassion, selflessness and humanity,” he said, while thanking the victims for their continuous understanding and forbearance.

The government, he added, also reiterated its support and firm commitment and gratitude to the TRRC commissioners and staff for their contribution towards establishing the truth about our dark past and encouraging national reconciliation in the process.

Lamin J. Sise, the chairman of the TRRC said: “We at the TRRC are very grateful about the announcement made by the Justice minister. Fifty million is a splendid contribution by the government to the reparation funds that we established and announced few weeks ago.”

The gesture, he added, will assist the healing, the reconciliation and hopefully, bring justice to the process. “The victims deserve this kind of attention. They are the ones who really suffered enormously in the 22 years of dictatorship. Those victims cannot be forgotten. Therefore, looking at the nature of the people and our country, that is not going to happen.”

Dr. Sise said: “Every Gambian was a victim under the brutal regime that ruled the country for 22 years. Our role is to try to establish record of these atrocities of these gross violations of human rights and abuses for healing and reconciliation.”