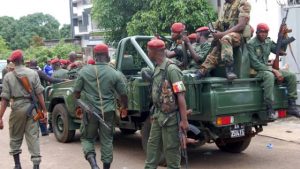 #Breaking_News
GUINEA PRESIDENT ALPHA CONDE WAS ATTACKED BY UNKNOWN GUNMEN IN THE CAPITAL CITY “CONAKRY” IT’S UNCLEAR IF HE IS DEAD OR ALIVE!!!!!!

Heavy gunfire has been reported in the heart of Gunean capital Conakry near the presidential palace though it was unclear who was responsible.
A senior government official said on Sunday that President Alpha Conde was unharmed but gave no further details.
A military source told Reuters news agency the Bridge connecting the rest of the city to the Kaloum neighbourhood, which houses most ministries and presidential palace, had been sealed off and many soldiers were posted around the palace.
A witness said he saw civilian with a gunshot wound.
Footages shared on Social media showed heavy gunfire raging out over the city, and vehicles full of soldiers approaching the central bank, close to the palace.
A Reuters reporter saw two convoys of armoured vehicles and pick up trucks heading towards Conakry Autonomous Port, also near the palace. The convoy was accompanied by a white vehicle that appeared to be an ambulance.