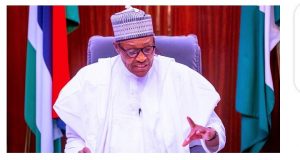 Afrinity Production unveil to you the statement of President Muhammadu Buhari saying he is avoiding to get into any debates until all facts are established. He disclosed this few days after he addressed the nation regarding the violence and unrest that marred the #EndSARS protests.

The president who said he had all along avoided going into a debate about the Lekki Toll Gate incidents until all the facts are established, appealed to the people all over the country to maintain peace and brotherhood as the machinery of the government and the wheel of justice turn against the perpetrators of murder, arson, stealing, rape, assault and malicious damage to public and private property.

He also has asked parents and guardians not to encourage their children and wards to partake in the ongoing nationwide looting, destruction of property.

Guinea President Conde wins re-election (Previous Post)
(Next Post) Nigerians Killed Before, During, And After #EndSARS Protests Must Get Justice – Gbajabiamila
Previous Image