Nigerians Killed Before, During, And After #EndSARS Protests Must Get Justice – Gbajabiamila 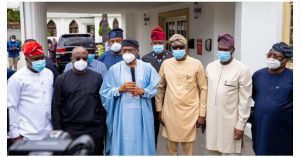 Afrinity Production reliably make known to you the statement of the Speaker of the House of Representatives, Mr Femi Gbajabiamila who has said that Nigerians killed before, during, and after the #EndSARS protests must get justice.

The Speaker, who sympathised with Nigerians from all parts of the country as a result of the killings, said the unity of the country remains non-negotiable.

Speaking when he paid a visit to sympathise with the governor of Lagos State, Babatunde Sanwo-Olu, on Sunday, the Speaker said the destruction caused by the protests was a very sad event that should not occur again in the history of Nigeria.

The Speaker and his delegation also paid a visit to the Oba of Lagos, Rilwan Akiolu, whose historical palace was destroyed during the wave of violence that engulfed the state. The delegation equally met with the national leader of the All Progressives Congress (APC), Asiwaju Bola Ahmed Tinubu.

Accompanied by some members of the House, Gbajabiamila, at the Lagos House Marina, expressed sadness over the wanton destruction of property and the devastation after he and members of his team watched a documentary on the incident.

Posted in Featured News | Comments Off on Nigerians Killed Before, During, And After #EndSARS Protests Must Get Justice – Gbajabiamila