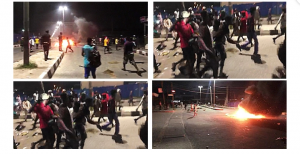 Afrinity Production discloses the United States Government condemning of the shooting of unarmed #EndSARS protesters in the Lekki area of Lagos State.

In a tweet on Thursday, the US Secretary of State, Mike Pompeo, equally called for the prosecution of those involved in the shooting.

He added: “Those involved should be held to account under the law. We extend our condolences to the victims of the violence and their families.”

The #EndSARS protest which has lasted about two weeks took a different dimension on Tuesday evening as soldiers opened fire on the protesters in the Lekki area of Lagos State.

This was a few hours after the Lagos State Government announced a curfew to curb the protest which was increasingly gaining momentum.

Posted in Featured News | Comments Off on Lekki Shooting: US Condemns Incident, Demands Justice For Victims