Pope Francis the head of the Catholic Church and sovereign of the Vatican City State endorses Homosexuality. 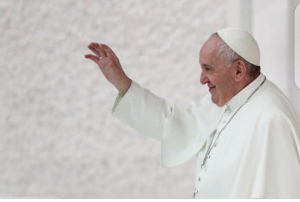 Afrinity Production draw attention to Pope Francis who became the first pontiff to endorse same-sex civil unions, sparking cheers from gay Catholics and demands for clarification from conservatives given the Vatican’s official teaching on the issue.

The remarks came in a documentary called Francesco that was released on Wednesday.

“Homosexual people have a right to be in a family. They are children of God and have a right to a family. Nobody should be thrown out or be made miserable over it,” the pontiff said, as he reflected on pastoral care for those who identify as LGBTQ.

“What we have to create is a civil union law. That way they are legally covered. I stood up for that,” he said.

However, conservative Bishop Thomas Tobin of Providence, Rhode Island, called for clarification. “The pope’s statement clearly contradicts what has been the long-standing teaching of the church about same-sex unions,” he said in a statement.

“The church cannot support the acceptance of objectively immoral relationships.”

Catholic teaching holds that gays must be treated with dignity and respect but that homosexual acts are “intrinsically disordered”. A 2003 document from the Vatican’s doctrine office stated the church’s respect for gays “cannot lead in any way to approval of homosexual behavior or to legal recognition of homosexual unions”.

Posted in Featured News | Comments Off on Pope Francis the head of the Catholic Church and sovereign of the Vatican City State endorses Homosexuality.