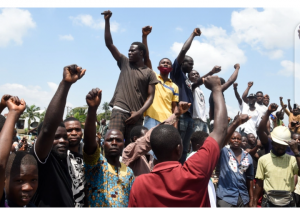 Afrinity Production draw attention to the disheartening statement of President Buhari calling Nigerians to stop demonstrating and engage with the government in a short televised speech on Thursday. The shootings have been widely condemned and totally out of line, but he did not speak of them at all during his address.

He called on Nigeria youths “to discontinue the street protests and constructively engage the government in finding solutions. Your voice has been heard loud and clear and we are responding”, he said.

Amnesty International said at least 12 people were killed by the Nigerian army and police in a crackdown on protesters on Tuesday that drew international condemnation. Overall, 56 people have died across the country since demonstrations against police abuse and bad governance began on October 8.

Vice President Yemi Osinbajo said his “heart goes out” to the victims of Tuesday’s shooting, as well as policemen and others who have lost their lives in several days of turmoil in Africa’s most populous country.

“The pain of these terrible events is palpable in our towns and cities, and some losses are irreplaceable, but we can and will get justice for all of them,” Osinbajo said in a statement.

Posted in Featured News | Comments Off on Muhammadu Buhari accuses demonstrators of threatening ‘national security’ as violence and fails to address shooting of protesters.

US gives full approval for antiviral remdesivir drug for Covid-19. (Previous Post)
(Next Post) Pope Francis the head of the Catholic Church and sovereign of the Vatican City State endorses Homosexuality.
Previous Image