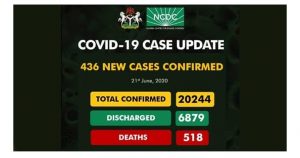 Nigeria’s COVID-19 infection have exceeded 20,000 as the country confirmed another 436 new infections on yesterday.

The Nigeria Centre For Disease Control (NCDC) disclosed this in a tweet.

Other affected states are Imo with 29 cases, Kaduna with 28, Ogun with 23, the FCT and Enugu with 18 each, Bauchi with 17, Bayelsa with 14, Rivers with eight, Osun and Kano with six each, Edo and Benue with five each, Adamawa with three, Borno with two, and Abia and Ekiti states with one each.

The NCDC also noted that a toll of 6,879 patients have recovered and have been discharged, while the number of death now stands at 518.