Our Biggest Challenge Has Been The Attitude Of Nigerians – Boss Mustapha 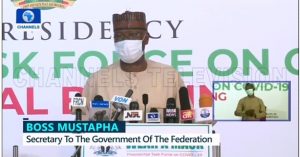 Afrinity Production unveil to you the challenges made known by the Chairman of the Presidential Task Force on COVID-19, Mr Boss Mustapha, on Thursday, as he ripped into the attitude of Nigerians, placing the blame for the country’s failure to have halted the escalation of the pandemic in Nigeria.

In an impassioned speech during the briefing of the PTF, Mustapha who is also the Secretary to the Government of the Federation said everything was put in place to stop the pandemic from spreading as much as it has in the country. The only thing missing was the right attitude.

A visibly upset Mustapha suggested that rather than follow guidelines, Nigerians thought only about their rights, failing to realise that the rights came with “correspondent responsibilities”.

“We would have flattened the curve. We would have dampened this ravaging virus by now if we had just complied with the simple instructions,” he lamented.

Another area Mustapha took up issues with Nigerians is in testing.
Since the first case of the pandemic was confirmed in Nigeria on February 27 and as Nigeria struggled to contain the spread, there have been concerns about the country’s testing capacity.

Although the country has ramped up its testing capacity, the PTF Chairman is unsatisfied with the attitude of Nigerians towards getting tested.

Apart from the attitude, Mustapha doesn’t see any major problem with Nigeria’s response.

For him, money wasn’t really the problem. Neither was it the absence of a plan.