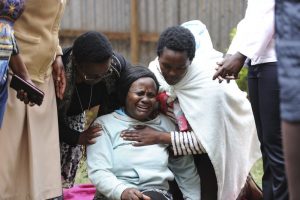 At least seven students have been killed and scores wounded after a classroom collapsed in the Kenyan capital, Nairobi, according to emergency services.

The incident at the two-storey Precious Talent Top School took place a few minutes after 7am local time (04:00 GMT) on Monday.

Al Jazeera correspondent Catherine Wambua-Soi said that rescue efforts were finished, with reports of seven deaths and 64 injured so far.

“It was a two-storey structure that was constructed using metal sheets and some wood, and a concrete slab to separate the two stories,” Wambua-Soi said, reporting from the location of the accident.

“People we’ve talked to said the concrete slab was reinforced very poorly and the government has said it wants to investigate how safe the building was,” she added.

According to Kenya Red Cross communications manager Peter Abwao, the school has some 800 pupils aged below 14.

Wambua-Soi added that the private school was located in a relatively poor neighbourhood.

“Children who come to this school would probably come from families that are not able to afford more expensive private schools, and the nearest public school was about two kilometres away,” she said.

“It’s schools like this one that are regularly badly constructed, made of iron sheets and concrete that is poorly reinforced.”

Wambua-Soi said the mostly-poor parents might not even be able to pay for the hospital, but that the government has promised it will foot the hospital bills for those affected by this.

Posted in Featured News | Comments Off on parents mourns their children in Nairobi
Tags: latest news