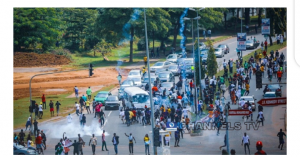 Afrinity Production make known to you the firing of teargas by Nigerian officersat #EndSARS protesters in Abuja, the nation’s capital.

The protesters who are demanding an end to police brutality and extra-judicial killings were intercepted by the security agents at the John Kennedy Street as they attempt to march through the back gate of the Presidential villa..

Some passengers were forced to walk as some commercial vehicles stayed off the roads for fear of being stuck in traffic while the popular aya roundabout is occupied by officers of the Nigerian Police Force (NPF) and the Nigeria Security and Civil Defence Corp (NSCDC).

Also, police officers were stationed in front of the Central Bank of Nigeria (CBN) headquarters with Armoured Personnel Carrier and water cannons.