Oscar-winning US actor reveals he has lymphoma 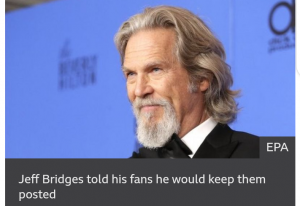 Afrinity Production reliably unveil to you the recent tweet of Oscar-winning American actor Jeff Bridges that he has lymphoma but says his “prognosis is good”.

In a tweet echoing his “Dude” character in The Big Lebowski, Bridges said he was starting treatment, acknowledging it was a “serious disease”.

Lymphoma is a form of cancer that affects the lymph system, which is part of the body’s germ-fighting network.

Bridges, 70, won Academy Award for Best Actor in 2010 for playing an alcoholic singer in the film Crazy Heart.

Advocates sometimes get a bad rap. However, many advocates work long hours fighting for justice, defending those who need it most, and upholding the rule to humanity. (Previous Post)
(Next Post) Police Fire Teargas At #EndSARS Protesters In Abuja
Previous Image