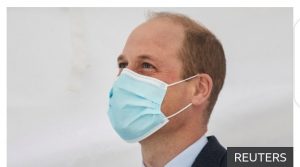 Afrinity Production unveil the Duke of Cambridge contraction of Covid-19 earlier this year, according to what palace sources have told the BBC.

BBC said it is believed he tested positive in April at a similar time to his father, the Prince of Wales.

According to the Sun newspaper, which first reported the story, Prince William, 38, kept his diagnosis private to avoid alarming the nation.

Kensington Palace, the office and home of Prince William, refused to comment officially.

Prince William, second in line to the throne, did not tell anyone about his positive test result because “there were important things going on and I didn’t want to worry anyone”, according to the Sun.

He was treated by palace doctors and followed government guidelines by isolating at the family home Anmer Hall, in Norfolk, the paper added.