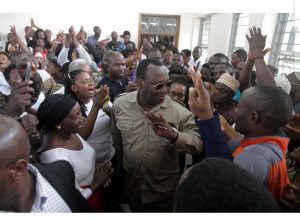 According to Aljazeera, the opposition has demanded a repeat vote citing widespread irregularities and called for protests against the outcome, which returned President John Magufuli to office with 84 percent of the vote.

“I got a message around midnight that they had been taken in,” Lissu said on Monday.

Lissu previously said he will not accept the eventual election results.

The vote “marked the most significant backsliding in Tanzania’s democratic credentials”, Tanzania Elections Watch, a group of regional experts said in an assessment released on Friday. It noted a heavy deployment of military and police whose conduct created a “climate of fear”.

The United States has said it was concerned about reports showing “systematic interference in the democratic process”, while the United Kingdom said it was “troubled by the reports of violence and heavy-handed policing in the elections”.