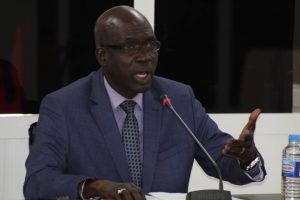 The Chief of Protocol at the State House has on Monday, 28th October 2019, testified that his former boss President Yahya Jammeh used to have sexual relationship with some ladies.

Alagie Ceesay said he was responsible for coordinating meetings and trips for the former President. Ceesay testified there were girls who were having sexual relations with former President Yahya Jammeh. He said there were girls living in the State House while some others used to come after working hours who used to have sexual relationship with the Gambia’s former president.

The 59 – year – old said one Jimbe Jammeh was the link between the girls and the former President and she was responsible for facilitating their meeting.

The Protocol Officer confirmed to the TRRC several names of women who the former President used to have sexual relations with, although they are under protection by the Commission. He said there were girls who were brought to him by the former President as protocol officers at the Office of the President.

Ceesay said the normal process of employing these girls as protocol officers would require his involvement and the Public Service Commission but instead, these women were employed based on Jammeh’s directive.

“It was an executive directive that select these protocol officers. You don’t have a choice. There were lot of them who came, mostly girls,” said Ceesay.

“You have a lot of them who were academically limited… I would find some of them to be good but others, not… It was an open secret. Some of them are “Special Ladies,” Ceesay said.

He said even the officials working at the State House at the time knew that the issue of protocol officer is obscure. The girls were being used for something else – sexual relation.