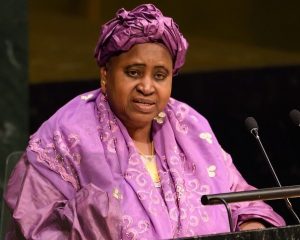 An excerpt of the 93-page report of the Commission of Inquiry that was established by President Adama Barrow in July 2019, to probe into the financial activities of public bodies, enterprises and offices as regards to their dealings with former Present Yahya Jammeh, the government of The Gambia therefore accepts the commission’s recommendation that two out of the three properties allocated to the former vice president of Dr. Isatou Njie-Saidy should be forfeited to the State.

The report indicates that the said properties will be forfeited to the state as the government land policy dictates that every Gambian is entitled to only one free allocation.

The report also notes that the government takes note of the commission’s observation that Dr. Isatou Njie-Saidy is unfit to serve in similar positions and as the longest serving member of former President Jammeh’s cabinet, and given her positions as V.P. of the republic, Dr. Njie-Saidy’s conduct fell far short of the standards expected of an occupier of the Office of the V.P. of the Republic of The Gambia.

“Dr. Isatou Njie-Saidy is hereby banned from holding public office for five years from the date of publication of this White Paper,” the report went further.

The report also indicates that the government takes note of the Commission’s statement that Dr. Njie-Saidy claims to have acquired 22 properties in the greater Banjul area even though her monthly salary as V.P. between 1998 and 2017 was between D47,000 and D60,850 per month while three of her properties were allocated to her by the government.

“The commission found inter alia, that Dr. Njie-Saidy was the vice chairperson and co-signatory to the Operation Save the Children Foundation’s account and there was no evidence that this foundation was legally registered,” the report revealed.

“Dr. Njie Saidy and Zineb Jammeh authorised all payments sometimes jointly and the commission was of the view that Dr. Njie-Saidy ought to be accountable for what she authorised and misused in breach of trust,” it stated.

The report further narrated that the commission also found Dr. Njie-Saidy liable for unjustified payments in the sum of D11,725.90 and $3,847,80.

The commission found that the management of the JFP funds was bifurcated to mask its real purpose, allowing former President Jammeh control of the real funds while the board and management provided the legitimacy he needed.

Added to that, JFP was therefore a smokescreen/front used by former President Jammeh to raise funds for his personal benefit and Dr. Njie-Saidy as chairperson and member of the JFP board and signatory to the accounts was in breach of trust and therefore accountable for its funds.