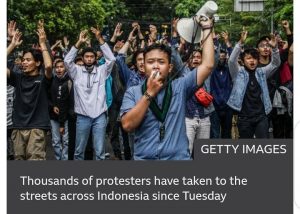 Afrinity Production draw attention to workers in Indonesia who are protesting for the third straight day after a new job creation law was passed this week.

According to BBC, thousands have taken part in strikes and demonstrations in several cities, with hundreds detained by the police.

Protesters are worried that the so-called “omnibus law” will hurt both workers and the environment.

But the government says the changes are needed to help its economy which has been hit hard by the Covid-19 pandemic.

Demonstrations have gathered steam in the capital Jakarta and other cities such as Bandung on Wednesday and Thursday, after relatively peaceful protests earlier in the week.

Indonesian police detained at least 400 protesters, including some who were allegedly armed with molotov cocktails and sharp weapons.

The bill, which is over 1,000 pages long and amends 79 existing laws, was passed on Monday with the support of seven out of nine parties.