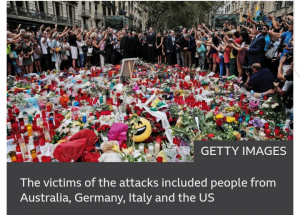 Afrinity Production unveil the trial of three men in Spain over two deadly jihadist attacks that killed 16 people and injured 140 in and around Barcelona in 2017.

The trio are accused of helping the perpetrators, who were all shot dead by police, carry out the attacks.

One of the perpetrators rammed a van into pedestrians in Barcelona’s Las Ramblas tourist area, before a twin attack was launched in a nearby town.

The Islamic State group (IS) said it was responsible for the attacks.

The men will appear in Spain’s top court in Madrid Today.