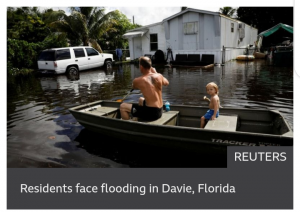 Afrinity Production draw attention to the Tropical Storm Eta that has hit Florida, flooding roads and knocking out power in some areas with heavy rain and strong winds.

Eta made landfall late on Sunday in the Florida Keys and forecasters fear it could still cause flash-flooding in the southern US state.

About 200 people are dead or missing after Eta hit Central America.

The storm is now moving south-west and is expected to slow and strengthen over the Gulf of Mexico.

Earlier classified as a hurricane before losing strength, Eta wreaked devastation in Panama, Honduras and Guatemala. It also passed through Cuba before making landfall in Florida.

Pictures posted on social media from the region showed houses with water up to their roofs and flooded fields. In Florida residents posted video of howling wind and driving rain.