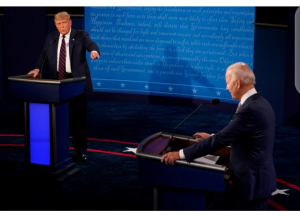 Afrinity Production brings to you the first Debate of the upcoming Presidential election in The US.

President Trump accused Biden of being a leftist and promoting socialism. Biden openly called Trump a racist and told him to “shut up” as Trump repeatedly tried to goad Biden with interruptions.

The debate did little to illuminate the policy choices facing Americans in the election and probably did not shift the dynamic of a race in which the incumbent, Trump, is fighting from behind.

Posted in Featured News | Comments Off on Trump, Biden battle in ‘ugly’ first US election debate